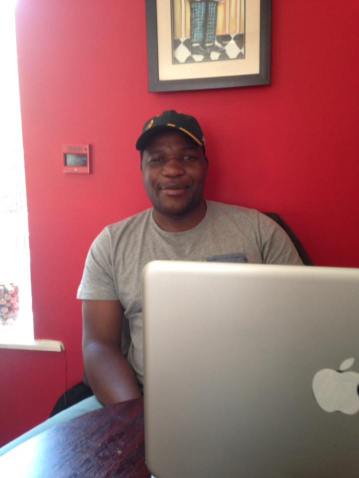 Tinyiko Chauke started writing a blog, African Stories. I invited him to the studio to talk about this. I have known Tinyiko for a while now and I know he is a passionate follower of all things politics and a proud African.

I also know that since his arrival here in Ireland 2 years ago, Tinyiko has adopted a few European traits, like drinking cappuccinos, eating mushrooms, going out late and sleeping late. We have lots of discussions about politics or just about Europeans and their way of living, and I am really looking forward to reading his blog, because I know it will be great.

Tinyiko wants to tell the African story from the perception of a man who was born and bred in Africa, he thinks it is necessary to change some misplaced perceptions that persist in Europe.

For example, some people think Africa is a country. Tinyiko has met people who when they hear he is from Pretoria ask if he knows John in Lagos… ( it takes less time to fly from Ireland to Lagos in Nigeria than it takes from Capetown to Lagos).

Africa has 53 countries, it is a very diverse continent with many different cultures. In South Africa alone there are 11 different languages, there are different racial groups and different tribes.

The European media often talks about Africa in one sentence with corruption and dictators. Tinyiko says that, some countries have indeed a very weak democracy  where leaders are not being held accountable for their actions and where the will of the people is being ignored. But it is unfair to paint the whole of Africa with the same brush. There are some African countries with very stable governments. South Africa has had democratic elections since 1994.

Corruption is a serious issue in Africa, but it is also a world wide problem. Europe loses up to 120 billion a year to corruption.

The problem in Africa is that corruption is so rampant, you even see it at the highest levels of government. You also see corruption happening in sensitive areas of government services, like the police. Corruption undermines the trust people have in political and economical institutions.

Through corruption we lose our health, we lose our freedom, sometimes even our lives. It has become like a malignous cancer that has spread through the body.

In Africa 30 to 50 billion dollars is lost to corruption per year.

The levels of corruption is terrifying in some places. There are countries where this can be openly discussed, but it becomes frightening in some countries, where corruption has become a way of life. In those countries, there is often no freedom of speech, so you cannot even say corruption exists there.

Corruption exists in Europe too, but the media doesn’t mention it. It is not so brazen, it is not as outspoken as in Africa.

Tackling this corruption problem in Africa will be very difficult. It has become part of the culture, people are raised with it. The best way is probably to educate people from a young age. Maybe the curriculum needs a subject like corruption, teaching children to understand that corruption leads countries to become failed states.

The people of Africa don’t realise that corruption exists also in Europe, the media does not report on that. But corruption in Europe is not as bad as it is in Africa.

Africa is a lot more developed than people think. For example, compared to South Africa, Ireland is very little developed, but some people here have asked Tinyiko if they have cars where he comes from or if they live in houses or still in huts. Of course there are still underdevoped areas in the country, but Africa has developed a lot over the last 20 years.

Of the 13 fastest growing economies in the world, six are in Africa. Ethiopia, Tanzania and Rwanda are doing very well. Especially Rwanda is a remarkable success story, coming out of the 1994 genocide. Kigali, the capital of Rwanda, is now called ‘the Singapore of Africa’.

Clearly these are the good stories to tell about Africa, bearing in mind though that the gap between the rich and the poor is getting wider and wider. That is also happening in the West, but the advantage in Europe is that the social security system exists to help people in need. In some African countries, there is just not enough tax base to set up a social security system. More people stay at home than those going to work, so it is impossible for governments to roll out all these social structures.

Very little is known about African success stories, although France 24 is making a big effort with their reporting of good news from Africa.

Of course South Africa is the most advanced economy on the continent, but Tinyiko wants to highlight the smaller countries who do extremely well like Rwanda, Tanzania, Botswana, and Mozambique, which is going to be the next big success story, with the discovery of gas and the interest which investors are showing in this country.

It is important for Africa to unite. If you look in Europe, where the EU, with all its faults (and there are many), has created a unity. There have been no more wars since 1945, countries cooperate, and there is a much better understanding of people.

Tinyiko is convinced that Africa needs to do the same. For example, there are more Zimbabweans, more Nigerians in South Africa than in Europe, but he has met and talked to more of Nigerians in Ireland. His perception has changed, and he has realised that Africans are one people.

Technology is also very advanced in Africa. An example hereof is the banking system, the way you will get notified on your phone every time a transaction is done on your account. Africans do business with each other with phones.

Africa can learn from the European project. In Europe you see people mingling with each

other, you can go to a pub where there may be up to 20 nationalities, all getting along fine.

Africans still have problems with nationalities, they don’t understand foreigners, they don’t look at foreigners as brothers, but as competitors for jobs, some men even say for women. Africans need to become more open, make an effort to get to know one another, this can be achieved through trade and through free movement of people.

Traveling more would also help. Tinyiko says he feels embarrassed to say he has never traveled to another country within Africa. This is one of the things he is determined to do when he returns. He wants to go to East Africa, Tanzania, Kenya, Uganda, to West Africa to visit Nigeria, Cameroon, Ivory Coast, any African country, to learn to understand people better. You never know a person until you visit his place.

Tinyiko hopes to change perpectives of people in Africa as well. The blog is aimed at African people mainly, and the rest of the world to understand. he hopes he can touch the issue of xenophobia and tribalism.

Tinyiko remembers being shocked at the frst sight of homeless people, he was surprised to find that not everyone is rich in Europe, which is often portrayed as the land of milk and honey in Africa.

Tinyko’s blog can be found here.

here is the podcast: