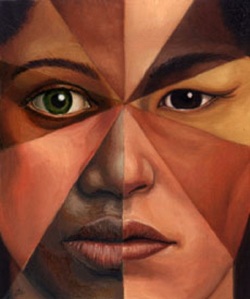 One of the lessons I have learned over the last few years as an expat, and through my friendships with people from all over the world is that racism is much more prevalent than we think.

I think that any white person of my generation is racist by nature or rather by inheritance. It is up to ourselves to do something about it.

There are many forms of racism, but I am talking of the most obvious one, the racism by white people against black Africans.

The first time I saw a black person, was when I was around 5 or 6. I was playing in the park with my sisters, sitting on the green grass in the sun and making daisy chains . A black woman watched us and I remember she was crying and came to ask if she could take a photograph. We said yes, of course. I have never forgotten that woman. I kept wondering about why she was crying, She has probably passed away by now, I will never find out, but she was one of those people who touched my life very briefly, and made a lasting impression.

The second encounter with black people was when we had to walk to the airport with my school to go and welcome Mobutu to Belgium.

We had to wave Belgian flags and shout ‘Long live the king, long live Mobutu!’ I remember standing there in the arrival hall, sweating and feeling very uncomfortable. My teacher wouldn’t let me take off my coat, because that would have been disrespectful. I was 6!

We waited for what seemed to be hours. There were a lot of very excited Congolese people present as well. When the king and Mobutu arrived, they were all shouting ‘Vive le roi, vive Mobutu!’. The king who was dressed in a military uniform passed me by without even looking at me. I was disappointed with this king without a crown who didn’t even look at his tiny subjects who had been standing there for hours, overheated and thirsty. I became a republican that day. And I learned that there were a lot of black people in Brussels. That was it.

The third time I remember was when I was driving through Brussels in the winter with my dad. It was snowing. Two black men were walking through town. Their heads were covered in white snow. Look, Black Pieter with white hair, my brother said. (Black Pieter is the servant of the Belgian and Dutch Saint Nicholas) My dad thought it was funny.

And then there were the stories coming from the USA, of discrimination and freedom fighters. My parents were very supportive of black people in the USA, but they laughed at the African men we saw in Belgium. Something wasn’t right.

It slowly became clear to me that I always noticed black people. I always looked or maybe even stared at them. Everyone joked about the Congolese, mostly making them look dumb. And I didn’t do anything about it.

I consciously moved away from racist thinking in my twenties, I befriended Moroccans and supported the ‘Touche pas a mon pote’ action against racism, but I still found myself looking at black people as if they came from a different planet. And it frustrated me. I hated being like that. It was time to do something about it. I started first to change my behaviour by looking away. I watched movies like Mississipi burning, and read stories about slavery. I became a big fan of Zap Mama, the Belgo-Congolsese a capella band with Marie Daulne at the front, and I read stories about slavery and discrimination. I also watched Cry Freedom, the movie about Steve Biko, the South African freedom fighter who was beaten to death by the SA police and in my mind I became a staunch anti-racist. I wore the Free Nelson Mandela T-shirt , and did everything I could to be a more liberal person.

I worked as a nurse in a prison hospital at the time, and saw the level of racism amongst personnel there. I saw prison guards beat up a black inmate, only because he was scared and wanted out. I found a Congolese man in a cell with high fever, he had been left there unattended for a few days. I brought him to the ward and took care of him. It later seemed the man had AiDS. He was one of the first AIDS victims in Belgium. He was also the first black man I had a conversation with. He was so respectful and grateful for my help and attention, I soon got to like him. His first name was Filimini.

Filimini did not survive AIDS. He passed away and I was glad I had helped him and hopefully made his life just slightly easier while he was sick.

Another black man I met who made a lasting impression on me was a South African freedom fighter who was on a mission in Belgium, I never found out why he was arrested. All I know is that he came to the sick ward and was put in a room. He was lying on the floor, doubled over in pain. The nurses were calling him a fake. They shouted at him in French, calling him pig, and telling him to stop pretending and get up. That was the morning staff, I came on in the afternoon. I was called to his room again and found him back on the floor, doubled over in pain. I could see this was no act. He was having cold turkey. I helped him up, called the psychiatrist, who promptly came and agreed with me that this man had withdrawal symptoms. We gave him the right medication, and soon he started feeling better, it seemed that this freedom fighter was being trained in Angola to fight the SA apartheid regime. He was given a drug ( forgot the name) to reduce his libido, which seems to be quite strong in SA men , and after being arrested and locked up, he went in withdrawal.

I had a few nice conversations with this very intelligent guy, I’ll call him Andrew, once he was better. I told him about the movie Cry Freedom and how I supported the fight against apartheid. And I apologised for the way some of my francophone colleagues had treated him. He told me he didn’t speak French, but he understood every word they had shouted at him. I felt deeply ashamed.

Andrew soon left back to his normal prison cell, I saw him pass by every now and then, he always had a nod and a smile for me. I wish I knew what happened to him, but I will probably never find out.

I had now reached the stage where I was totally anti-racism, but I still didn’t know any blacks outside of work and I still found myself noticing that someone was black and wondering about them. It frustrated me. I knew the only way to get over this last hurdle was to befriend Africans.

It was virtually impossible in Belgium. The black community keeps very much to itself there, most of them don’t speak Flemish, they are more part of the French speaking community. It wasn’t until I lived in Ireland and my daughter changed schools at the age of 10, that I finally got the opportunity to befriend the mothers of her Nigerian friends.

Our daughters are the best of friends and getting to know them has made my life fuller and has made me stop staring and wondering.

I am now at a stage where I truly don’t care what colour anyone is, and it has set me free. You should try it!